Deborah’s aim is for you to experience tantric pleasure and wellbeing. 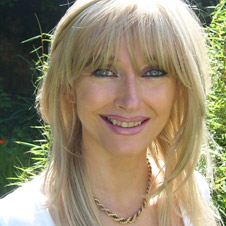 Since the age of three Deborah was set aside by the Yogic Tantric Masters of the Himalayas to learn the ancient art of White Tantra. She was to learn Mysticism, white tantric massage, the ancient path of tantra, yoga of the mind, Alchemy, yoga breath work and ancient secret mantras for healing and wellbeing.

Through her many years of training with the Masters, Deborah became a High Priestess of White Tantra, holding the highest initiation for a western mindset in this ancient path, later being initiated into the linage of the siddhas.

Deborah qualified as an International Masseuse (C.I.D.E.S.C.O.), Advanced Counselor, Sex Therapist (I.A.S.E.C.T.) and Hypnotist. Putting her skills together, she was able to translate Eastern Mysticism for the western mindset.

In the year 2009 Deborah had an NDE – a near death experience, which was brought on by her master Sri Mahavatar Babaji and Christ. During meditation, her master Babaji approached her and told her she was going to die. With this, he held her hand as she felt her last breath and departed from her body into the Christ Light. Where she experienced life after death in the realm of the Light – the light of Christ, one with the Supreme Being, some call God. In this realm of the Light, she experienced unconditional love, healing and the mysteries of the Universe.

After her NDE experience Deborah was called again by the Masters to visit the Awakening Temple in Santa Monica. At the temple, she was initiated into the linage of the yogis by Nandi, who had spent 10 years meditating in the cave of the Himalayas. During her fire ceremony initiation, Sri Mahavatar Babaji told Nandhi to give Deborah her new spiritual name, which was to be Anandi Devi.

After her initiation Deborah then had the great privilege of meeting Baba, a recluse Yogi in Santa Monica who had spent 45 years in silent meditation in the Himalayas. When Deborah experienced the touch of this great Master, she entered into the Christ Light again and her mind was opened and she understood the meaning of ONE Power, union with the Supreme Being.

Next Deborah was told to go back to England and continue teaching White Tantra in its true meaning to those who are searching for healing and the true meaning of tantra. To change their beliefs about themselves for a more positive outlook and meaning to life. To learn the secret art of white tantra and the wisdom and spiritual insights of this ancient path.

Deborah is a teacher, practitioner, master and healer in the art of tantra, an author to several books and started a charity 20 years ago called The Shofar Trust helping children with aids.
She has helped many people change how they think about themselves, therefore changing their lives. She has helped couples get closer together and other couples to realize it is time to move on as friends. Some of her clients have reached enlightenment, while others received emotional healing and alchemy of mind.

She has helped many women regain their sense of femininity, sexual healing, overcome the menopause, emotional healing and wellbeing.

She has also helped many men with prostate cancer, helping them change how they think about themselves for a better quality of life

Tantric Massage for Men Experience tantric bliss with a tantric massage with gentle touch. Helping you to relax, forget work and rejuvenate with tantric pleasure.

Tantric Massage for Women Be pampered and empowered and realise the Goddess power within, with a tantric massage.

How To Please A Woman Learn what pleases a woman and become confident and a better lover.

Tantra Healing Program For Past Sexual Abuse, Trauma, and Rape Come on a journey of healing through tantra.

Tantric Chakra Healing Tantric Chakra healing can bring about sexual wellbeing to being able to make correct decisions through self esteem and being better able to voice your opinions.

Tantra Session for Couples Discover heightened pleasure for you both with the ancient art of Tantra.

Tantra for Gay Couples Learn how to work with same sex energies with unique Tantric practices.

So Who Are My Clients?

For celebrities and those in public office  I sign a confidentiality form I do not court the press.